"Good evening Andrew, this is Iin from JTV. We'd like to make a video profile of you for our TV shows  because we see you as a very inspirational photographer."

Humbled and excited, I immediately agreed for the interview. It's been a while since I did my last TV interview so the prospect of having another one immediately excited me.

JTV is the largest TV station in the region and they really want to shoot my interview as well as see me in action when photographing wildlife. Since going to the forest in Borneo was impractical for the interview, we decided to take a more simpler approach: shoot the interview at the local Zoo. You can see the video interview and the accompanying article below.

The audio is in Indonesian and I hope you get a feel of the language and can understand it all. Just kidding! I've added the English subtitle to the video. Enjoy!

Scooping Awards and Income from a Photography Hobby

Who says that having a hobby is only good for killing your spare time? Andrew Suryono, a freelance photographer from Indonesia, proved that his photography hobby not only can bring him good income but also international achievements that made Indonesia proud.

Working according to what you love, that's what Andrew Suryono does. He is a freelance National Geographic photographer from Surabaya, Indonesia. He started his photography hobby out of his boredom working in the corporate world shortly after his graduation as an Industrial Engineer from UC Berkeley, California, USA.

He started his photography hobby in e-Commerce. He then ventured to portrait photography to take better photographs of his family. Still unsatisfied with those challenges, he decided to dive into the photography world even further.

He moved on to landscape and wildlife photography. Learning independently from sources like National Geographic magazines, he used his new skill to explore the exotic landscape of wildlife of Indonesia.

That achievement not only made him proud, but also Indonesia. This is because "Orangutan in The Rain" became the first photograph from Indonesia to be featured in the National Geographic Fine Art Gallery. In addition, it breaks the National Geographic record as the fastest selling photograph in the history of the gallery. Andrew himself became the first Indonesian to be invited to do a meet and greet in Las Vegas, Laguna Beach and La Jolla Galleries in USA.

"Follow your passion, follow your heart. Shoot what you love." That was his advice for beginners who are just starting out in the photography world. Deciding on a passion without focusing too much on money is important to create something that's uniquely comes out from the heart.

Other than that, telling the stories behind the photographs is far more important than just creating pretty pictures. From his photography, he wants to help preserve the beauty of our natural world, including Indonesia's.

He wishes that there will be more Indonesian photographers in the future. This will help to introduce Indonesia's natural beauty to the outside world. He believes that the tourism sector can be the country's primary source of income in the near future.

"There are so many of them. I think Indonesia is one of the richest countries in the world in terms of biodiversities and landscapes. We are blessed to have so many beautiful islands and landscapes." He concluded. 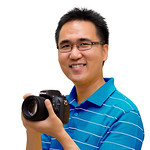 An engineer who became an international award-winning photographer. Besides producing fine art photographs, he loves helping people from all walks of life to discover their passion in life by teaching them photography through online courses and live workshops.

Copyright © Andrew Suryono. All rights reserved. No contents can be reproduced without written permission.